The “Invisible War” against Sexual Assault in the Military: How Community Psychology Can Help Identify an Effective Strategy 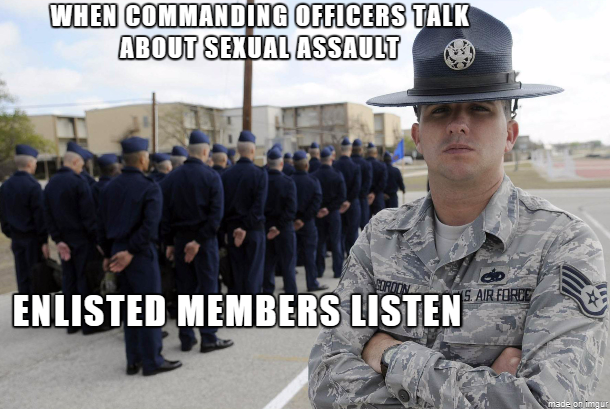 “Military sexual assault training, when done right, can be effective.”

Every year of military service, 9-13% of service women and 1-2% of service men experience sexual assault.

Is this training effective in communicating information and preventing sexual assault?

News You Can Use

Social context matters. The U.S. Military is comprised of many communities. Organizational factors like service branch mediate the depth and effectiveness of the content delivered. We need to understand these differences and ensure that sexual assault prevention training is both effective and context-relevant.

Holland et al. used a secondary analysis of DOD data from the 2010 Workplace and Gender Relations Survey of Active Duty Members (n = 26,505). The dataset identifies gender (male/female), as well as service branch (Army, Navy, Air Force, Marines, Coast Guard), and service rank (officer versus enlisted). The team also analyzed whether or not the respondent experienced sexual assault in past year of service.

Policy Makers—We must hold the U.S. Military accountable not only for prevalence of training, but also nuanced content.

Research and Evaluation—Gendered analysis is vital when evaluating sexual assault programs. History of sexual assault and gender are lenses through which individuals can “hear” training.