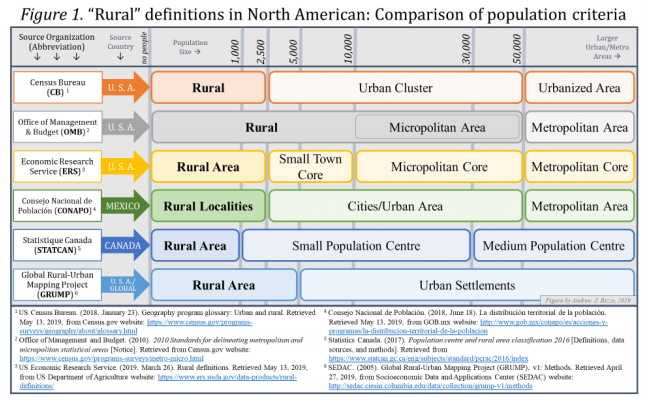 We explore a range of answers to a seemingly simple question: “What is rural?” We explore this topic with an overview of commonly used definitions, commentary on their gaps, and thoughts about alternative ways to classify “rural communities.”

Rural is … Not One Single Definition

For both researchers and practitioners, operationalization is critical to compare and build together the things we learn in one context with what we uncover in another context. Debate over operationalizing “rural” is not new. Consider San Bernardino County, CA, which encompasses over 20,000 square miles (twice the size of Massachusetts). This county is a little larger than Switzerland, and about the size of Belize and El Salvador combined. San Bernardino touches two Metropolitan Statistical Areas and is considered part of the Greater Los Angeles area. While it stretches eastward across the Mojave Desert and Death Valley touching the Nevada and Arizona borders, its large population is primarily in the west, within commuting distance to LA and Riverside. But what about the central and eastern parts of San Bernardino County – are they rural? The answer matters to small towns like Landers, CA (pop. 2,900) which can face obstacles to rural health funding simply because they border a heavily populated area.

The US uses multiple definitions of “rural.” Figure 1 highlights three differing definitions from US government agencies. The Census Bureau (2018) and the Economic Research Service (ERS; 2019) definitions may appear similar, but ERS evaluates population using entire counties as their “areas;” whereas the Census utilizes a complex land-use and residence area mapping approach to create their own “areas.” As illustrated with San Bernardino County, the distinction is consequential.

Because different definitions are used by different US government agencies when allocating public funding, “rural” areas by one definition may not qualify for rural funding by another. A town may be qualified as rural based on census numbers indicating low population density but disqualified based on location. Navigating which meaning is used and whether it applies to a given community can be intimidating and confusing. For example, a recent FAQ from the Bureau of Health Workforce (2019) advised potential applicants to consult three different definitions when applying for a Rural Residency Development Program grant.

Rural is …the Residual

Quantitative definitions often treat “rural” as the residual category: somewhere left over after identifying “urban” areas. A “commuting area,” the areas surrounding an urban region where large populations of people live, is often classified as urban. Rural emerges as a negative space, so designated because of characteristics it lacks, rather than what is there.

Rural is … More Than Population Density

Qualitative understandings of the mindset or meaning of rural have value for the people who live in these locations. The rural communities of, say, southwestern Arizona are vastly different from the rural of midwestern Iowa or northern Maine. Culture is impacted by not only blunt geographical density measures but also the views of the people who live there.

Alternative approaches to defining rural exist. The US ERS goes beyond population-based categories, such as the Rural-Urban Commuting Area (RUCA) codes (2016). These codes quantify the degree of commuting that occurs from different areas (from the metro to micro, or small town to micro, etc.). While still based on population data, these classifications capture the culture of small towns that are located near well-maintained highways or railways. While they may be geographically disparate from other areas, the people living there tend to work and commute to urbanized regions. Small commuter towns have a much different flavor both from agricultural communities of similar size where income is generated locally, and from communities with large numbers of second homeowners relative to year-round residents.

Likewise, the geographic classifications of Statistique Canada now consider multiple factors (2017). The 2016 designations consider population density, employment density, paved road distance, and airport locations in conjunction with the land area to classify communities. Reviewing these newer definitions is beyond the scope of this brief commentary, but it is promising to see the start of more diverse approaches throughout North America.

Rural is…Different Across the Globe

Looking beyond North America, we encounter still more definition overload. The UN Statistics Division states it well, “Because of national differences in the characteristics that distinguish urban from rural areas, the distinction between the urban and the rural population is not yet amenable to a single definition that would be applicable to all countries or, for the most part, even to the countries within a region” (2017, p. 188). The UN also notes that, while population size may be a useful metric, it is often of limited value in industrialized countries. More nuanced criteria that evaluate nonindustrialized, less population-dense areas of a country should be used to supplement rigid quantified categories.

What Rural is… Recommendations
“Rural” definitions change over time; they differ between countries; and they certainly change in everyday usage. In light of this brief column, we offer two small pieces of advice.

When you read “rural” in an abstract or presentation, resist the urge to interrogate the presenter on precisely which definition was chosen and why. Instead, ask how areas were delineated as rural and how the project considered different aspects of rurality.

We urge community psychologists and others interested in working in “rural” towns to go beyond government classifications. Rather, talk to community partners about experiences living in their area. Move beyond the binary – “Is it rural or is it not?” – to learn how rural residents understand their access to valued resources, not only to supermarkets and health care, but also to clean air, quiet nights, affordable housing, access to nature, recreational space, and other factors that matter to them.

Above all, let’s continue the conversation, exploring perspectives and alternatives in how one might define “rural.”

UN Department of Economic and Social Affairs, Statistics Division. (2017). Principles and recommendations for population and housing censuses: 2020 round (Revision 3). Retrieved from https://unstats.un.org/unsd/demographic-social/Standards-and-Methods/files/Principles_and_Recommendations/Population-and-Housing-Censuses/Series_M67rev3-E.pdf

US Economic Research Service. (2019, March 26). Rural definitions. Retrieved May 13, 2019, from US Department of Agriculture website: https://www.ers.usda.gov/amber-waves/2008/june/defining-the-rural-in-rural-america/