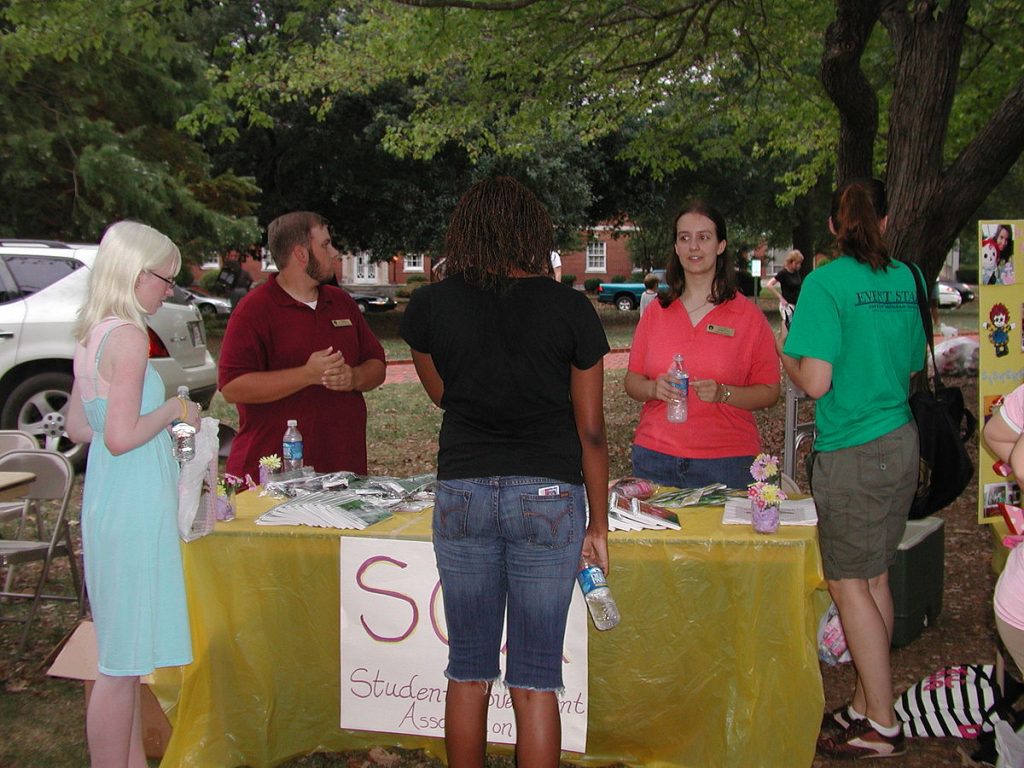 The Community Practice Bulletin highlights the use of community psychology in practice. The August 2017 Bulletin features work of undergraduate and graduate students at Wichita State University to increase campus and community awareness and support for current social issues

*All columns are available online here

Society for Community Research and Action

Our nation is at a critical point for action. With a US president and administration denying, withdrawing, and negating marginalized populations’ rights and experiences, people across the country are organizing to counteract these ill-informed initiatives. Many community psychologists have brought attention to the unique placement of our field, including our ability to become leaders in social justice. Furthermore, young adults’ experiences from generational mistakes continue to impact our everyday lives as students fight these social issues on their campuses.  Now is the time for community psychologists to become leaders in campus activism.

“We (community psychology students) continue to find that we are among WSU’s loudest campus advocates.”

Students in the Community Psychology Program at Wichita State University (WSU) are at the forefront of organizing, advocacy, and research on their campus. This past year, students mobilized others on campus using community psychology principles. By collaborating on campus, we were successful in bringing together graduate community psychology students and undergraduates wanting to create positive change. Mini-case studies will highlight the initiatives we undertook from 2016-2017 as they relate to community psychology and our goal of engaging students. Moreover, these insights will show how campus activism led by community psychologists is possible and encourage other campus advocates to take a stand.

As the very first CPsyA organization, we wanted to enfold community psychology into the campus climate. We continue to find that we are among WSU’s loudest campus advocates. In 2014, CPsyA responded to a call for action on campus after a sexual assault occurred without administrative intervention for fear of negative public image. After researching the topic, CPsyA decided to put their research into action through The Vagina Monologues. This benefit production aims to address multiple objectives, including: bringing awareness to violence against women and girls; encouraging collaborations across campuses; normalizing “taboo” conversations; promoting inclusion and diversity (particularly for women of color and transgender women); and most importantly empowering women to speak their truths. We produced The Vagina Monologues less than one month after the inauguration of the current president—thus, the show became a protest of his administration’s sexist, racist, transphobic, and homophobic stances. The production raised approximately $3,000 for a local sexual assault prevention and support center and changed conversations and perceptions in the community.

CPsyA was also an outspoken voice against the Kansas Board of Regents’ decision that all public universities allow for the concealed carry of weapons. This caused concern among graduate teaching assistants and students as a whole who live, work, and learn on campus. CPsyA members testified at the Student Government Association (SGA) meetings to discourage SGA’s support for the policy, collaborated with other Kansas state universities to share a petition, and partnered with Wichita organizations to protest the policy’s implementation. In addition, graduate students also testified at the Kansas Capitol to support bills that would repeal the law.  Although concealed guns were legally permitted on campus July 1st this year, CPsyA was successful in collaborating with other organizations and empowering individual voices to share their research and perspectives.

As a student chapter of the National Alliance on Mental Illness (NAMI), community psychology students aimed to end mental illness stigma and bring awareness to WSU students’ lived mental health experiences. NAMI hosted open mic nights to support students’ needs for creative outlets in expressing their lived experiences. Students from across campus performed original poetry and songs, read selected writings they believed appropriately captured their journey, and shared personal stories of recovery. Additionally, NAMI hosted educational events, like an LGBTQIA Health Panel and Eating Disorder Awareness Panel, which allowed college students to share their personal experiences and promote community education. Further, we joined a new initiative started by the NAMI National organization called #IStopStigmaBy. People anonymously share how they aim to end stigma around mental health and illness in their communities on social media. Our own initiative built public awareness, promoted advocacy within WSU, and increased visibility of individuals with lived experiences of mental health in an empowering setting. By creating events and initiatives to help to normalize the issues related to mental health, NAMI on Campus WSU provided students with the knowledge that they would have a community of support on campus.

“Now is the time for community psychologists to become leaders in campus activism.”

Community psychology students also made change from “the inside” as well, serving as Graduate Senators and one undergraduate student serving on cabinet as the Diversity Task Force Chair. Through these positions, senators wrote legislation that prompted campus administration to respond to issues facing the student body at large, but especially focusing on marginalized communities. Examples of this include: sponsoring legislation supporting Black Lives Matter on campus and allocating resources to and creation of a task force for African-American students; writing legislation that requested that the University

President sign a petition for DACA students against President Donald Trump and declare WSU a sanctuary campus; holding events such as “Diversity in the Workplace” to showcase diverse populations in a professional setting; gain a seat the President’s Diversity Council and other events and committees. Serving in these positions allowed us to have a seat at the table, allocate funds to underrepresented campus organizations, and encourage student empowerment. By our involvement, heavy use of social media, and refusal to compromise on human dignity, students were empowered to attend events, rallies, and share their stories for issues they have seen on campus.

“community psychology has a place in the social justice movement.”

In the 2016-2017 school year, WSU community psychology students fought more diligently for students’ rights. Using empowerment, collaboration development, and community organizing as our guiding principles, we made lasting policy and culture changes on campus. There is still a lot to do, despite the small (and frankly big!) wins we saw this year. However, we also proved this year that community psychology has a place in the social justice movement. We call on other community psychologists on campuses to start their own CPsyA as a vehicle for creating change. Now is not the time to sit idly by– teach community psychology by empowering and organizing students.  It begins with social action in your own campus community.

Berkowitz, 2017. “Putting Our Vision into Practice,” THEory into ACTion Bulletin.