A Love Letter to Marie Jahoda 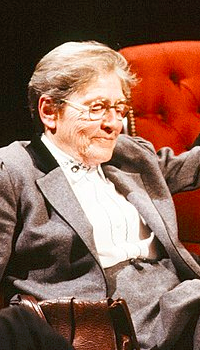 A Love Letter to…

is a regular column where we pay homage to thought-leaders who inspired the roots of our field at Swampscott. We honor those whose work and ideas are fundamental to Community Psychology and who continue to inspire us today…

Born in 1907 Vienna, Austria to politically-active Jewish socialists, Marie Jahoda lived a life of social justice on the brink of a new world order. Her multi-method work in the center of social controversy as well as her theoretical contribution to a strengths-based community perspective places Jahoda in direct lineage of the field of Community Psychology.

Jahoda studied at the University of Vienna with Karl and Charlotte Bühler at the social democratic Vienna Psychological Institute. With then husband, Paul Lazarsfeld and their colleagues, Jahoda was among the first social science researchers to use multiple research methods including disguised observation. Jahoda’s work in the working class district of Marienthal (near Vienna) showed the importance of regular, stable employment to a community. Beyond economic stability, regular work is central for a personal and social sense of identity. High unemployment-communities risk not only economic devastation, but social peril as well. Jahoda’s early work on unemployment laid the groundwork for the understanding of communities within their economic context.

Would economic crisis lead to revolutionary class consciousness as followers of Karl Marx suggested? Or was there an underlying psychopathology of underemployment that threatened the sense of community?

Jahoda bravely situated her science as the world was on the brink of war determining the values of capitalism, socialism, and communism. When Vienna fell to Nazi Germany in 1934, Jahoda continued her work covertly until her arrest in 1936. Forced to flee Vienna without her family or friends, including her 7-year old daughter, Jahoda re-settled in Great Britain where she continued her research on unemployment and assisted the British Foreign Office on civilian and enemy morale during World War II.

At the conclusion of the war, seeking to re-connect with her now-American daughter, Jahoda set out for the United States where she worked with the research department of the American Jewish Committee, the Bureau of Applied Social Research at Columbia University, and with social psychologist Stuart Cook at New York University. Jahoda continued to study the community impacts of economic devastation. She applied her social justice lens to timely topics including the relationship between psychological disorders and anti-Semitism and the reduction of prejudice. Never one to shy away from risky intellectual and political issues, Jahoda became involved in the American civil rights movement and anti-McCarthyism.

One of Jahoda’s greatest contributions to the field of Psychology and Community Psychology specifically (as it would later be called) was the pursuit of research “in the field.” Jahoda’s contributions to studying behavior in a community context include a two-volume textbook Research Methods in Social Relations. Jahoda regularly developed and taught courses where students spent time in the community context (prisons, schools, hospitals, etc.). Relating academic theory to the community-level was revolutionary. In 1955, she became the first woman president of the Society for the Psychological Study of Social Issues (SPSSI).

“…the absence of mental illness is not a sufficient indicator of mental health.”

In the late 1950s; Jahoda and others pushed to redefine positive mental health from pathology. Her 1958 monograph Current Concepts of Positive Mental Health, argued that mental illness was a departure from social conventions. These social conventions, rooted in community, could be changed and adapted to be more inclusive. Jahoda was among the first to explore personal and community-level resiliency (as it was later called). Jahoda reiterated that good mental health was far greater than the absence of disease, thus conceptually lighting the path for the later mission of the World Health Organization. Jahoda identified five characteristics of healthy people, which for the most part, remains largely unchallenged. Healthy people can:

Jahoda lived a brave life engaging in important work; even when the personal consequences were dire. Her emphasis on the importance of fieldwork, multiple methodologies, and the connection between meaningful work and inter/intra-personal success laid the theoretical groundwork for much in our field. Unsurprisingly, Jahoda continued to write, take visiting professorships, and slowed very little until her death in 2001.