Infograph: Effects of Deportation and Forced Separation on Immigrants, their Families, and Communities 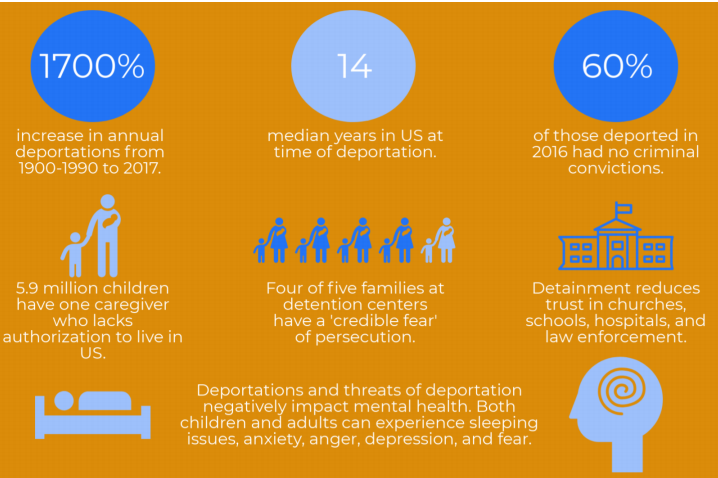 The US deports people without criminal histories who have lived here for decades.
In 2017, 340,056 people were deported from the United States, up from only approximately 20,000 annually between 1900 and 1990. The majority of people who are deported have lived in the US for over a decade and do not have any criminal convictions. A growing number of those deported are caregivers of US citizens. Family reunification is not the primary goal of current immigration policies. Current policies have the potential to harm US citizens by separating families— including children— from their parents and caregivers.

Deportations have psychosocial consequences for immigrants.
Many of the immigrants who are deported are forced to return to dangerous places where they may have faced trauma and violence prior their migration. In fact, nearly four in five families screened in family detention centers have a ‘credible fear’ of persecution. Immigrants have been kidnapped, tortured, raped, and murdered in their countries of origin following deportation from the US. Those immigrants who survive deportation often struggle to support their families from afar and maintain contact with them.

Deportations have psychosocial consequences for children and families.
Approximately 5.9 million US citizen children have at least one caregiver who lacks authorization to live in the US. Deportation is associated with a host of negative psychosocial effects for children and other family members left behind. Children whose caregivers are deported become more at-risk for food insecurity, housing instability, and economic hardship. Because men are more frequently deported, mothers frequently become single parents, often with low incomes and sometimes facing large legal bills. Consequently, they must often work longer hours and have less contact with their children. Older school-aged children frequently become primary caregivers of their younger siblings and/or work to support the family, impacting their own academic achievement. Children have many symptoms of psychological distress following a caregiver’s deportation, including eating and sleeping problems, anxiety, sadness, anger, and withdrawal. Following family reunification, the negative impacts of family separation often remain.

Deportations have psychosocial consequences for communities.
Following immigration raids and deportations, immigrant community members often become more fearful and mistrustful of public institutions. Research indicates that immigrants are less likely to contact the police for any reason, including to report a crime, in communities where local law enforcement participate in immigration enforcement and following deportation. Moreover, immigrants become less likely to seek needed medical treatment, participate in schools and churches, and access other vital social services. Immigrant adults are especially emotionally taxed following deportations and threats of deportation; their increased stress has been linked to cardiovascular risk factors. Immigrant children living in communities where immigration raids have taken place feel abandoned, isolated, fearful, traumatized, and depressed. Children, regardless of immigration status, experience fear and shame regarding deportation, which impacts their sense of self and wellbeing.

In sum, deportations impact the emotional and behavioral health of our nation.

Policymakers should take a public health perspective on deportation, recognizing the direct and indirect psychosocial impacts of deportation on communities and the nation at-large. Policymakers should consider the best interests of US citizen children in immigration reform. Immigration policies should keep families together and discourage deportation. To protect human rights and mitigate the myriad of adverse consequences of deportation and forced family separation, the Society for Community Research and Action recommends:

1. Comprehensive immigration reform that affords permanent protections to all people who are unauthorized to reside in the US currently and end the threat of deportation.

2. No forcible separation of families given the demonstrated negative impact on children, other family members, and the broader community.

3. Modification of the hardship exemption to deportation statute in the Immigration and Nationality Act to include other family members in order to reflect the reality of kinship care in this country, such as grandparents, aunts, uncles, and cousins.

4. Narrowing of the scope of enforcement and removal activities, particularly accounting for parental and caregiving status, and length of residence in the US.

5. Increased judicial review and discretionary authority of judges over deportation cases, as was the case prior to the passage of the Antiterrorism and Effective Death Penalty Act and the Illegal Immigrant Reform and Immigrant Responsibility Act in 1996.

6. Ratification of the 1990 International Convention on the Protection of Rights of All Migrant Workers and their Families, which would create a human rights framework in US immigration policy.

7. Ensure that there are no deportation quotas in policy or practice. Previous quotas have resulted in the expansion of detention to those who were detained and deported simply due to immigration status.

To access the full policy statement summarized in this brief and review sources, please read here and reference: Society for Community Research and Action (2018). Statement on the effects of deportation and forced separation on immigrants, their families, and communities. American Journal of Community Psychology, 62, 3–12. https://onlinelibrary.wiley.com/doi/full/10.1002/ajcp.12256.

Information is also available in Spanish by clicking here.