Family Detention of Undocumented Immigrants: We Can Do Better 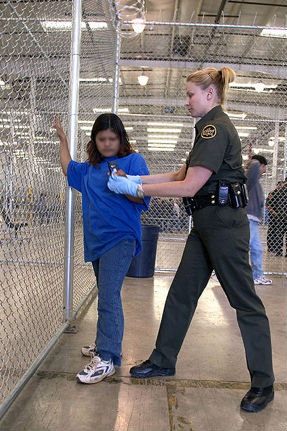 A summary of the Incarceration of Undocumented Families: A Policy Statement by the Society for Community Research and Action: Division 27 of the American Psychological Association  from Rachel Storace

“The current U.S. immigration policies and their enforcement have detrimental effects on migrant adults, children, families, and communities”

Detaining families makes them vulnerable to abuse and mistreatment; and is associated with long-term mental illness.

The support demands for detention facilities is a significant strain on surrounding communities.  Negligence to the needs and rights of detainees is common.

There are less expensive options that are more ethical, effective, and cost-efficient.

In March of 2016, the Society for Community Research and Action published a statement outlining the harmful effects of current policy regarding the incarceration of undocumented families in the United States. You can download the full statement here. The following is a summary of the research that formed the basis of that statement.

The history of detention facilities in the United States is fraught with abuse and mistreatment of immigrant families unauthorized to reside in the U.S.  The SCRA statement described here was based on numerous studies about the psychological effects on individuals and children residing within those detention facilities.

The U.S. has been using family detention facilities to hold unauthorized documented men, women, and children since 2001. Reports of physical and sexual abuse, malnutrition and inadequate access to essential resources such as health care and legal services have led to temporary lulls in use and unpopularity of detention centers. Still, detention facilities remain in use and have grown overall in response to the wave of immigrants seeking safety from dangers in their countries of origin.

Many immigrant families are already suffering traumatic circumstances, and detainment exacerbates these issues. Living in detention facilities can have additional negative consequences on immigrants’ mental, physical, and emotional well-being. International agencies and human rights groups have opposed detention of refugees and immigrants as it “runs counter to principles of respect for human dignity and protection of children, especially those seeking refugee status.”

What Can You Do?

If you live in the US, share the SCRA statement with your representatives and their staff.

Write a letter to the editor of your local paper. Use the statement, and this page, as the basis for your letter.

Inform the your family and friends concerning the facts of the incarceration of migrant families.

Current U.S. policy denies families the ability to be released on bond and, therefore, access to legal support.  This violates their rights as established by the U.S. Department of Justice and UN High Commissioner for Refugees.

Immigrant detention facilities have proven to be inefficient and burdensome for local communities and law enforcement. When detainment is not a threat, immigrants are much more willing to cooperate with law enforcement. Immigrants not fearful of detainment are more likely to be active in their communities; benefitting their overall safety. Undetained immigrants also have greater access to social service programs which are better equipped to offer comprehensive support.

Multiple studies have shown that immigrant families experience the negative psychological effects of detainment, including significant psychiatric disorders. According to Luis Zayas, children face unique consequences in detention and are vulnerable to problems with brain development and emotional intelligence.  Meanwhile, the practices of Alternatives to Detention (ATD) yield favorable results in high rates of compliance with laws and court appearances without the negative outcomes that result from detainment or even the threat thereof. One study has found that “the federal government’s ATD program yielded a 93.8 percent appearance rate for immigration hearings.”  Other findings indicate that even the fear of detention negatively compromises communities with increases in crime, and more health issues and instability within businesses, schools, and available human services. Overall, “the research confirms that treating migrants with dignity and respect, as well as providing them with clear and timely information, increases cooperation and compliance”.

The Effects of Deportation on Families and Communities, and The Incarceration of Undocumented Immigrant Families.