Casey’s General Store and the Nutrition of Rural Illinois 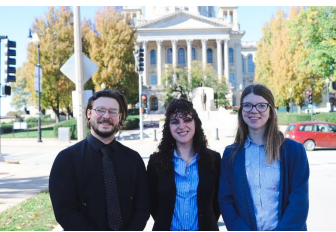 Casey’s General Store is a convenience store that sells pizza and gas in 16 states. It began in 1968 in Iowa, and now it saturates the Midwest with over 2,300 stores (Casey’s, 2021). It is the fourth largest convenience store chain and the fifth-largest pizza chain in the United States (Walljasper, 2017). Illinois alone has 448 outposts and accounts for around 20% of the chain’s locations. With so many branches across Illinois, Casey’s General Store means employment opportunities, a place of congregation, and it may be one of the few food 41 Winter 2022 take-out options in the community. Oftentimes when Casey’s is spoken of, it is reflected positively. The value of Casey’s in supporting community change can already be observed at a large scale, such as their Cash for Classrooms grant, which offers one million dollars in grants to help in physical improvements with schools, provide materials, support teachers, and enhance community engagement (Casey’s, 2021). In rural areas where there may be few competitors, a business such as this has the power to shape a community.

Casey’s General Stores may have similar effects on rural communities as dollar stores (namely, Dollar General and Dollar Tree), which have expanded rapidly, operating over 30,000 stores in the United States (Aubrey, 2019). Dollar stores are known to have drastic effects on the communities that they come into, causing sales in local grocery stores to drop by 30% (Mitchell & Donahue. 2018), meaning less fresh food for rural residents. People who have less access to convenience stores such as Dollar General or Dollar Tree have been shown to have healthier diets and lower levels of obesity (Larson, Story, & Nelson, 2009). The question is, are Casey’s related to poorer nutrition outcomes in rural communities?

In May of 2021, a small dataset was extracted to examine how the number of Casey’s locations in Illinois’ counties related to nutrition outcomes. To create this dataset, data were extracted from four locations: (A) ArcGISHub (Casey’s General Store Locations, 2014), (B) ILGenWeb (n.d.), (C) United States Department of Agriculture Economic Research Service (2020), and (D) the Robert Wood Johnson Foundation (County Health Rankings, 2021).

Data from Source A included the name, address, and city of each Casey’s location in Illinois. Because Source A did not list the county name, data from Source B, which was a list of each Illinois city and county, was merged with data from Source A. Source C was a list of every county in the United States, along with the Rural-Urban Continuum Code, which divides counties into nine community sizes that are either metro or non-metro based on population size and adjacency to an urban area. Information from all other states but Illinois was removed from Source C since Illinois was the state of interest for this research. Then, the number of Casey’s locations for each county was counted so that the data could be analyzed at the county-level instead of at each individual Casey’s location. Finally, data from Source D was compiled. This data included the name of every county in Illinois, percent adult obesity, percent diabetes prevalence, percent with limited access to healthy food, and percent of food insecurity (County Health Rankings, 2021). For more information about the data matching process, please contact the principal investigator at nsummers-gabr42@siumed.edu.

Next, using a series of hierarchical regressions, we examined whether the number of Casey’s per 42 Winter 2022 county predicted nutrition outcomes (access to healthy food, food insecurity, diabetes, and adult obesity) beyond rurality status. Results found that the model for adult obesity was statistically significant [F(2,84)=5.09, p =.008, R 2=.11]. While rurality status did not significantly contribute to the model [β =-.005, p=.96], the number of Casey’s in a county significantly accounted for the proportion of the adult population with obesity in that county [β =.33, p=.004; see also Table 1]. Therefore, the rural context was not enough to explain adult obesity, but the facilities in that community did.

Casey’s General Stores add value to rural communities. They serve as a local grocery store and the only place to get dinner for take-out. At the same time, there are still many unknowns about their impact on rural communities. For instance, while these data suggest that counties with more Casey’s locations have a higher proportion of the adult population with obesity, more research is necessary to unpack this relationship and understand the impact that Casey’s has on rural communities. These results do not conclude causation but rather spark curiosity. This relationship could especially be important for understanding the nutrition of rural families who may have to rely on Casey’s if they live in a food desert or food swamp. For youth, Casey’s could be where they get their groceries for school lunch, it could be where the family goes out to dinner for pizza, and it could even be the place where youth congregate with their friends. Casey’s could have the power to shape rural nutrition for families. Through understanding the role that Casey’s serves in rural communities, we can begin to identify ways to leverage it as a community partner to improve the health and wellness both in and outside of Illinois.