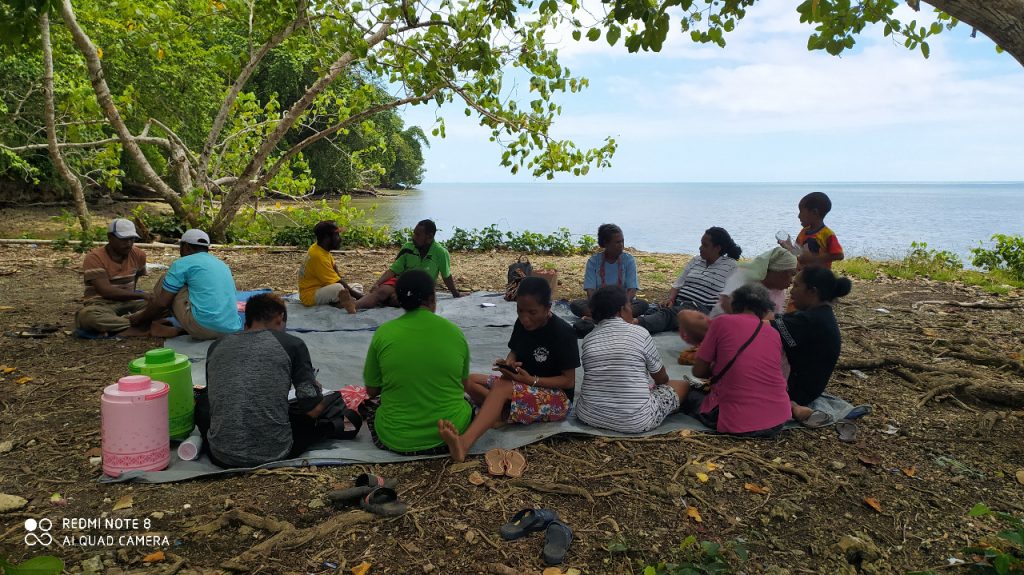 Photograph by Wahyudin Noer. Permission granted by the author.

Feelings of insecurity can point to a wider structural colonisation.
────
Current development work can strengthen the oppression and sustain de-humanisation.
────
High levels of anxiety, shame, and hopelessness encourage dependency on existing power structures rather than collective action.

In 2019 SeventyThree.ltd, a firm of analysts, business developers, and development educators, working together with the Barunastra Foundation, an Indonesian organization dedicated to the empowerment of coastal communities, commissioned a study on the livelihood and governance system of the small island communities of Saribi-Sukmander in Papua Province, Indonesia. Our team applied a set of tools and methods for community empowerment, blending critical conscientisation methods. Conscientisation helps participants reflect on and “unpack” dominant belief systems that result from oppressive cycles of socialization. The team used two curricula; Training for Transformation (TfT) and the remembering method inspired by the Memory Work Method.

“The driving factors of emotional insecurity include the history as well as the existing structural factors: community awareness of their situation that informs their action.”

TfT manuals contain a set of tools, including the identification of a “code” as a concrete presentation of a familiar problem about which the group has strong feelings. The group selected personal debt as a common issue among them. The problem identification was followed by six steps of deconstructing the structural factors contributing to this seemingly personal economic problem.

In the discussions, participants shared the feelings of shame, guilt and hopeless associated with debt. Some of them noted that they have unintentionally taught their kids to tell lies to the debt collector so that they can avoid having to pay back their loans. Others also mentioned that they are indebted to a level to which they do not feel that they have any freedom in their lives.

Participants analyzed the major economic, political and social systems that perpetuated debt. The economic factors include a lack of necessary public investment and market access to generate enough income to get out of poverty. The group pointed to the juxtaposition of engaging debt in order to get money to buy fuel and fishing gear to pay off existing loans. Further, being trapped in debt with very little social capital leads to a dependency on the elites who have access to government resources. This competition has eroded trust among community members, preventing them from collaborating and organizing to find solutions.

The Memory Work Method emphasizes the relevance of experiences in shaping one’s personalities. The sharing of personal experience enables each person in a group to recognize the social and cultural threads tailoring their shared stories. The process began in silence remembering the most meaningful sound of their upbringing and concluded with intergroup sharing.

Five women and five men living in fishery communities responded to our invitation. The Memory Work Method captured the depth of the individual as well as collective emotions. In the sharing among the women’s group, the sound of nature appeared to have had strong connection with the collective emotions. Each remembered the sound made by the sea waves, birds, and leaves in the garden. They used to enjoy being in the nature when growing up and feel safe in it. The women remembered the abundant food in the garden and the feeling of security that gave. The situation of living an abundant life has changed following degraded food gardening practices.

In their upbringing, up until the age of 12, they used to play almost nude without fear of being sexually abused. The group also claimed that the situation has changed to an extent that young girls are scared of being left alone and are anxious about their sexuality.

The men’s group shared a childhood memory of the sound of parents, especially of their mother. A man shared the memory of his mother’s comforting cuddles and imitated the vocalizations she used when putting him to sleep in her arms. Together the group remembered, wrote, and sang an old song mimicking a mother’s comforting lullaby. Sharing in the men’s group was led by testimonies about the security and love that a mother naturally provided to their children. In their analysis, the men made a strong connection with the eroded love and compassion among the community. “Our relationship is dominated by jealousy and competition” said one of them.

Feelings of security became a major longing among the participants. The tools and methods from TfT and Memory Work Method generated community testimonies wherein we measured feelings of insecurity. We analyzed the transcripts of the Memory Work Method, the interpretation and discussion of the code, and the six-step process of deconstructing structural factors of insecurity.

“There is little togetherness among us.”

The TfT and Memory Work Method revealed how:

Practice: Negative self-image and shame are often considered individual-level issues. However, community programming and healing is appropriate when there is shared internalized oppression.