A Modern Example of Colonialism: We Will Not Forget Ayotzinapa 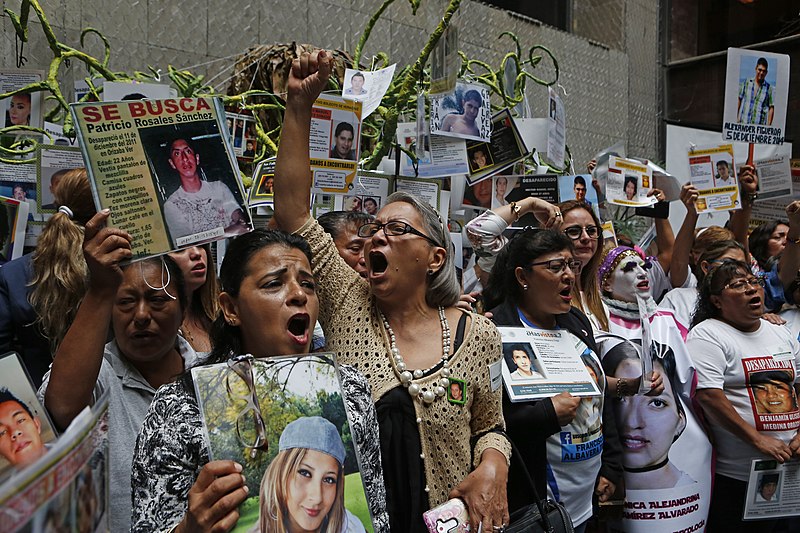 On September 26, 2014 near Ayotzinapa, Guerrero, Mexico, a group of 43 normal school students were kidnapped, murdered, and then disappeared, by what many believe was an operation of the Mexican federal government and military. Since the event, the Mexican federal government has attempted to silence and cover up what actually happened to those students. Ironically, the students were taken while on an overnight bus trip going to a memorial demonstration in Mexico City, remembering the massacre of hundreds of students that occurred on October 2, 1968 in Tlatelolco Plaza.

The massacres in 1968 as well in 2014, were intended to silence students speaking against the government and an elite class of Mexican politicians.

The student victims of 1968 were advocating for their rights and opposing the newest education reform that president Enrique Peña Nieto had approved. The massacres in 1968 as well in 2014, were intended to silence students speaking against the government and an elite class of Mexican politicians implementing practices that support the coloniality of power and knowledge.

The story of Ayotzinapa is now being publicized by an original documentary film produced by Enrique García Meza called “Ayotzinapa El Paso De La Tortuga” that was released on Netflix, on March 14, 2018. The film addresses what happened in the state of Guerrero, Mexico on September 26, 2014, the government attempts at a cover-up, and the massive resistance of the families and communities in Guerrero and the rest of Mexico since the murders. In my perspective, “Ayotzinapa El Paso De La Tortuga” is not only a film that addresses corruption and coloniality, but also shifts paradigms about the ongoing resistance and highlights the trauma and memorial of the families of those students that have not been accounted for. The documentary depicts the wide speculation about the Mexican government’s desire to terrorize students for holding onto their native traditions, voicing their concerns, and fighting for social justice. The students have become perceived as a threat to the PRI political party (Institutional Revolutionary Party) because they have been questioning abuses of power by the politicians; the education afforded the students a more powerful voice than intended. The PRI as a political party has a legacy of oppressing the people of Mexico. The Normalista students are not an exception as they continue to question their elected officials and government. The murders near Ayotzinapa have had the opposite effect to silence: thousands of people, both nationally and internationally have been in the streets demanding accountability and refusing to forget what happened.

Colonial education systems are structured to produce individuals who learn how to work mechanically but do not question the nature of the system.

The education system in Mexico and many other nations has been colonized by the needs of the market and politicians who have attempted to control the skills and knowledge people learn. In addition, many politicians and government institutions across the world are attempting to privatize the education system and create an education system that benefits corporate profits. Often, students are required to memorize standardized information rather than allowing their creativity to reach full potential. Freire (2000) in Pedagogy of the Oppressed, addresses how the current education system plays a role in teaching individuals to memorize but not to learn concepts; “Banking education treats students as objects of assistance…banking education inhibits creativity and domesticates” (Freire, 2000, p. 83). In other words, colonial education systems are structured to produce individuals who learn how to work mechanically but do not question the nature of the system. Given the resistant values of the normal school, this has not been possible, because the school administration, the other students, and the families of the disappeared have refused to be silent about the disappearances and have demanded an accounting through national and international channels.

Enrique Peña Nieto has constantly attempted to colonize the indigenous people of Mexico, especially the groups of the South closer to the border through the use of legislation. This neglected part of Mexico lacks the resources to make their land more productive. It is believed the Mexican central government has neglected the Southern region because the people have practiced ongoing resistance to the government’s attempts to exploit their culture and natural resources. The people of the South experience extreme financial hardship and the work of the populations has been undervalued. In 2012-2013, Enrique Peña Nieto passed an educational reform bill that would change the public educations system of Mexico. The bill standardized education based on the principles of the capital of Mexico, not taking into account certain areas, especially those in the South that have different languages and different levels of education and needs. Many students in rural areas in Mexico do not have adequate access to nutrition and early on in their lives, are needed to help with household duties. The education reform does not take into account the variables that might affect the ability of children to learn the standardized material, nor the learning of practical skills of agriculture as a valid form of knowledge. Many of the Normalista educators did not agree on standardizing the education system and the lack of consideration for the limits and lack of resources in certain poor and indigenous communities. Normalista students as well as established educators have been opposing the education reform that was signed by President Enrique Peña Nieto. The education reform gives the department of education the right to grade educators by means of measuring students’ academic performance and firing teachers whose students do not score high on the standardized test. Teachers trained at La Escuela Normal Superior de Mexico (ENSM) protested the education reform. This demonstration highlights coloniality of power and knowledge through the imposition of Eurocentric education practices on indigenous people.

ENSM is a publicly funded education institution for teachers that will teach in rural areas as well in marginalized and Indigenous communities. I was familiar with ENSM, through an associate I met a few years ago, who was studying to become a teacher at the normal school in Jalisco Mexico. She shared how it was a difficult school to get in because it was intended to train the best teachers to teach in public schools. Many of the students that attend the university themselves come from marginalized communities. The victims of the massacre near Ayotzinapa, Guerrero, attended a similar normal school. The students of this institution both study and work the land to help their families survive and remain united with the values, languages, and cultures of their local communities. The elite political class has a negative view of the students’ choice to continue to farm as they are educating themselves to become teachers at rural schools.

Maldonado-Torres (2016) addresses the role of state education systems in colonizing individuals and communities. Maldonado- Torres (2016) states “Universities become centers of command and control, which make them easy to militarize when opposition rises. Many students feel choked and breathless in this context” (Maldonado- Torres, 2016 p.3). In addition, he mentions the struggle to liberate and decolonize the universities is mostly composed of young students. Against the student movements, the government uses censorship, defunding of programs, and rankings by the most conservative faculty. “In the most successful cases, limited measures are implemented, but then contested, sometimes for years, until administrations can successfully undermine them or eliminate them with reference to new financial crises or one-sided reviews and rankings” (Maldonado-Torres, 2016, p.3 ). The new education reform plans to reset standards for recruiting teachers that are familiar with and committed to a standardized education system.

Since the Ayotzinapa case went public, many international journalists and the United Nations Office on Human rights have investigated. Historically, students in Mexico who opposed the Mexican government, especially the views of PRI and the way they govern, have been silenced. The past incidents of violence have not received media coverage; the most powerful television station in Mexico is affiliated with the elite political class. The politicians and political parties, through violence and massacres, have terrorized students as well as oppressed, marginalized, and Indigenous communities. Along with silencing and forgetting about the past tragic events, the current regime has not allowed the nation to heal. The group of students murdered near Ayotzinapa in 2014, were not only studying to become teachers, they were also becoming advocates of social justice and decoloniality in their communities; they wanted to empower regions that have been marginalized and neglected. Maldonado-Torres (2016) stated that this is a movement of the youth who want to recover what has been taken away from them through colonization and bring back educations where you work in partnership (Maldonado- Torres, 2016 p.3). Through the courageous documentary tracking the commitments of families of the disappeared and the demonstrations of thousands who refuse to forget, the night of September 26-27, 2014 will forever be remembered and will always leave a scar on the presidency of Enrique Peña Nieto.

As a Latino/Hispanic student, I was raised in a marginalized community… I find myself often asking whether I want an education, or do I want to continue to help and support my family?

As a Latino/Hispanic student, I was raised in a marginalized community where we are offered limited opportunities for advanced education due to the increasing cost of education in the United States. I find myself often asking whether I want an education, or do I want to continue to help and support my family? Do we all have equal access to education, or would legislation, testing, and rising tuition fees be a way to keep certain groups or individuals from pursuing advanced education and break the cycle of poverty? How much of my identity and values do I have to give away to succeed in higher education? We need a free public education system that allows access to all students regardless of family incomes, and respects the values, ways of life, and local knowledge that will liberate us to create communities where we can thrive and feel secure. The struggle for decoloniality of knowledge is happening not only in rural Mexico, but in the United States and in marginalized communities all over the world.

Maldonado-Torres, N. (2016). Outline of ten theses on coloniality and decoloniality.